Growing up throughout the Great Northwest, Alan DeVries has a passion for not only the land that he sells, but also for the land that he lives upon. Alan has spent the last 42 years exploring the most beautiful spots througout Oregon and Washington. Southern Oregon is now home to himself, amazing wife, and 3 very active and growing boys! Alan's love of the land began after high school where he spent many summers fighting wildland fires throughout Washington and Oregon. It was through this experience and his adventurous spirit that allowed him to see some of the most beautiful and remote areas around. Alan went on to graduate college with a degree in Fire Science with an emphasis on helping landowners protect their property from wildfire. This is an asset he carries with him even today in his real estate career, helping land and homeowners ready their property for sale. Alan also previously owned and operated a successful automotive business for nearly 10 years throughout the central and eastern parts of Washington state. His experience in business and marketing give him a leg up on many of the traditional real estate brokers. Alan's first priorities are his faith and his family. "Raising three boys from childhood into manhood is quite the experience", he often says. Today Alan and his family call Medford, OR. home as they love the lifestyle that Southern Oregon has to offer. Alan's "off time" consists of coaching basketball, wrestling, and getting away into the woods as often as possible with his family. The mighty Rogue River is their family hotspot during the summer along with many weekend getaway's as possible. Alan's real estate expertise is the evergrowing vineyard and winery niche that has Oregon on the map as a top-notch destination. He has been one of the top 3 rural land brokers in So. Oregon for the past 3 years and has been a part of some of the most successful vineyard sales in recent memory. "Selling farm, ranch and vineyard property and helping buyers explore all Oregon has to offer is a dream come true," Alan says, "truly a passion like no other." 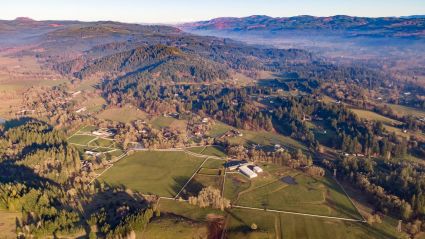